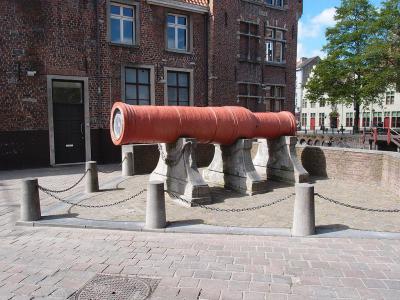 Dulle Griet, aka Mad Meg, is a demon of Flemish folklore. She leads an army of women to pillage hell. "Griet" was a name commonly given to an enraged shrewish woman. Much like the "Karen" appellation used today.

There is another Dulle Griet. It is a super gun of the middle ages, called a "bombard." Bombards were often used as siege guns. They had a very large caliber, large enough to hold a man.

The bombard was developed in the 15th century from 32 long bars wrapped in 61 iron rings. The Ghent bombard, Dulle Griet, was used in the siege of Oudenaarde in 1452. The Ghent attackers were forced to retreat but they left the monster gun behind. It was returned by the Oudenaarders in 1578.

The big gun dates from 1431. Jean Cambier, major arms dealer for Philip the Good, Duke of Burgundy, was probably the gunmaker. It could fire balls with a diameter of 64 cm, weighing perhaps 295 kg. The gun is massive. Originally it was about 12,500 kg. It has lost some mass through rusting. It is now 12,250 kg.

The Ghent bombard was originally called "Rode Duyvele", the Red Devil, because of its color. It is still red. It rests on bluestone brackets in Grootkanonplein ("Big Gun Square").
Image Courtesy of Wikimedia and Gordito1869.