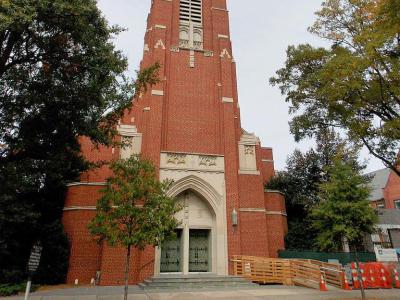 Edenton St. United Methodist Church was founded in 1811 after a conference of Methodist ministers in Raleigh under the leadership of Methodist Bishop Francis Asbury. Edenton has assisted the community throughout major national events such as the American Civil War, World War I, World War II, and the Great Depression. Edenton's third sanctuary was destroyed by a fire on July, 28, 1956, but that sanctuary was rebuilt. The fourth and current sanctuary of Edenton was first used on February 2, 1958. The Curtis Fellowship Center was completed in 2002. The Poindexter Memorial Building, which opened in 1937, stands between the sanctuary and the fellowship center. The Poindexter Memorial building contains classrooms, offices, a nursery, and the Joseph G. Brown Chapel. One of Edenton's first ministers, Rev. Melville B. Cox, left his appointment at Edenton in 1831 to serve as the first Methodist missionary to Africa.
Image Courtesy of Flickr and LBG Photography.
Sight description based on Wikipedia.