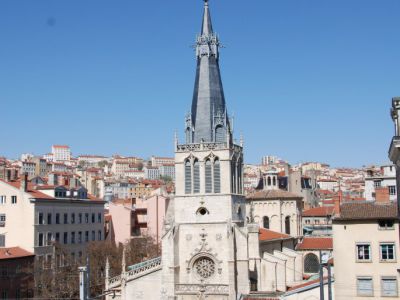 The Eglise Catholique de Saint Paul is one of the oldest churches in Lyon and one of the best preserved.

The first church, which was part of a monastery, was built around 549 and destroyed in 732. A new church was built over the remains of its predecessor in the 9th century, but the church you will see today is the result of different stages of reconstruction dating from the 11th to the 19th centuries.

In the 10th century the church became part of a necropolis with three cemeteries. The bell tower was added in 1440. The exterior of the Gothic side chapels feature decorations of leaves and animals under the cornice with animal grotesques over them. The dome has two floors of blind arches set at irregular intervals.

The lantern on top of the bell tower was added in 1835 and the eleven bells in the tower were installed in 1899. The spire was once wooden, but this was replaced by a stone one in 1982.

During the Revolution, the church was used to stock saltpetre and when it became a parish church, in 1801, the paving had to be replaced. The decorations over the St Lawrence entrance are eggs and Acanthus leaves. The nave has four bays separated by four pillars, whose sculpted capitals depict leaves and human heads. The quarter-circle vault in the apse has early 20th century frescoes by Borel.

The side chapels date back to the 15th century and in one of them you can admire “L’Adoration des Bergers”, painted by Blanchet in 1688.
Image by Vincant ACHILLE on Wikimedia under Creative Commons License.
Sight description based on wikipedia