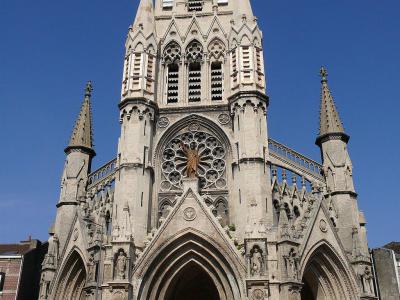 The Church of the Sacred Heart is one of the largest temples in Lille, standing 90 meters long, 24 meters wide, and 22 meters high under the main vault. This Roman Catholic church owes its existence to a vow made by the Ladies of the Association des Enfants de Marie du Sacré-Coeur on October 7, 1870 to spare Lille from the Prussian invasion.

The Neo-Gothic church was designed by the architect Jules Batigny, and erected in two phases: between 1875 and 1878, and then between 1895 and 1898, during which the apsidal chapel (Chapelle du Vœu or Chapel of the Vow, behind the choir) with eleven stained glass windows was added. The latter was preceded by a second vow, pronounced by the ladies of the city, concerning the construction of a chapel dedicated to the Sacred Heart and intended to become a specific place of contemplation within the church.

The Sacred Heart temple was ultimately consecrated on June 20, 1902. By that time, its bell tower had not been finished yet. Presently, it houses a carillon of several bells which have been silent for several years now. The steeple, 75 meters high, created by the architect Charles Sarazin, was completed only in 1928. Built of reinforced concrete, it had suffered from bad weather and had to be totally restored between 2005 and 2008.

In April 2018, the church was closed to worship, by a municipal decree, for a period of six months; the reason was dry rot. By now, of all its canopies only seven have been restored; the other five are still in poor condition and await restoration.

The building has been classified as a national historic monument since 1983.
Image Courtesy of Wikimedia and Peter Potrowl.
Sight description based on Wikipedia.