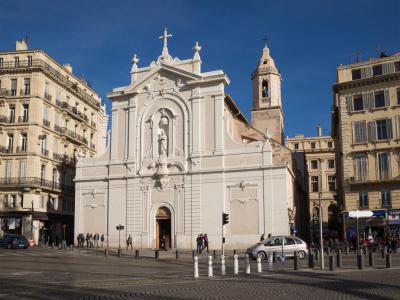 The Church of Saint Ferreol is a Roman Catholic church in Marseille. The original building on site was owned by the Knights Templar. However, in 1369, it was given to a community of Augustinian hermits. By 1447, they decided to spearhead the construction a new church building. It was dedicated in 1542, even though the vault was only completed in 1588.

The high altar was designed by Dominique Fossaty, as were the altars of the Augustinians and of the ship-porters. Inside the church can also be found the Mazenod family's tomb dating back to 1564 and the Montolieu family's tomb, dating back to 1695. The relics of Saint Louis of Toulouse (1274–1297) are also in the church.

The church has a few works of art. Three paintings by Michel Serre (1658-1733) are displayed inside the church: Sainte Marguerite, La Vierge à l'enfant apparaissant à Saint Pierre and Saint Paul. There is also a bust of Saint Ferréol de Vienne. Additionally, there is a sculpture of Saint Augustine designed by Raymond Servian (1903-1953). Another sculpture, by Élie-Jean Vézien (1890-1982), represents Saint Theresa. Yet another sculpture, this time by Louis Botinelly (1883-1962), is of Joan of Arc. A more recently sculpture, designed by Yves le Pape in 1979, depicts the Holy Family.

The neogothic pipe organ, designed by Augustin Zieger, dates back to 1844.
Image Courtesy of Wikimedia and Unukorno.
Sight description based on Wikipedia.