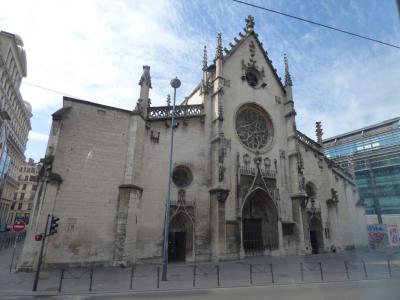 The Eglise Saint Bonaventure is the only medieval church to survive the construction of the rue Impériale (now the rue de la République).

The original church was part of a Franciscan monastery and when a large crowd gathered for the funeral of Cardinal Bonaventure in 1274, they couldn’t all get into the church.

Jacques de Grolée, the grandson of the seneschal who had granted the site to the monks, decided that a bigger church was needed, but work didn’t start on it until 1325.

Finished in 1327, the new church faced south, which was unheard of at the time, as all churches faced east to catch the first rays of light – and, according to ancient superstition to chase the Devil out of the building at dawn.

Jacques de Grolée died before the church was finished and he was buried there, under the main altar.

In 1484 the building was enlarged once more and renamed after the 13th century cardinal. During the French Revolution the church suffered the indignity of being used as a grain store, but at least it survived and was restored in 1806 by Joseph Fesch.

The church boasts 18 chapels, nine on the east and west sides of the nave and a fine stained glass window depicting Saint Remigius baptizing Clovis I.
Image by Jean-Louis Lascoux on Wikimedia under Creative Commons License.
Sight description based on wikipedia