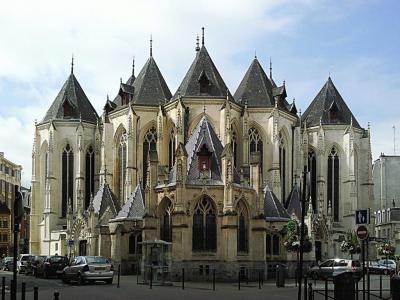 The Église Saint-Maurice, on rue de Paris in Lille, is a Gothic- (in part Neo-Gothic-) style hall church that was built over the course of nearly 500 years: from the late 14th century until the late 19th.

The first written mention of a church on this site, the one called Saint-Maurice de Fins, dates back to 1066 and relates to an establishment of the collegiate church of Saint Peter funded with proceeds from the Saint-Maurice. The exact time of its appearance is unknown. Historians associate it with the mallus publicus (a kind of public tribunal) that was held in Lille in 875, although the charter of 1066 suggests a somewhat later timing. No earlier churches in this area are known of.

Some say, however, that it was built on the ruins of a Roman shrine to Mars, hence its dedication to Saint Maurice, rather unique for the diocese of Tournai. Also, the name of Fins comes from the Latin word “fines” which means frontier.

During the French Revolution, the church was looted. Part of its confiscated items were returned in the early 19th century, along with some paintings garnered from the city's other convents. Among them the works by Jakob van Oost dit le Jeune (1639-1713): Transverberation of Saint Thérèse; The Flight to Egypt; The Adoration of the Shepherds; The Marriage of the Virgin; and The Presentation in the Temple. There are also four paintings of the scenes from the Passion by Louis Joseph Watteau (1731-1798).

The church contains the tomb of Charles Ferdinand d'Artois, Duke of Berry, assassinated in 1820, being the youngest son of Charles X, King of France, and his wife Maria Theresa of Savoy.

During the 19th-century restoration led by Philippe Cannissié, the church received a set of Neo-Gothic furniture and was fitted with stained glass windows. It was listed as a historic monument in 1840.
Image Courtesy of Wikimedia and Velvet.
Sight description based on Wikipedia.