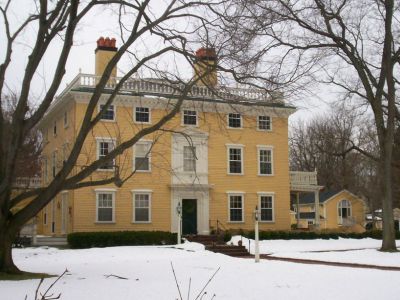 Elmwood, also known as the Oliver-Gerry-Lowell House, is a registered historic house in Cambridge, Massachusetts, known for its several prominent former residents, including: Andrew Oliver (1706–74), royal Lieutenant Governor of Massachusetts; Elbridge Gerry (1744–1814), signer of the US Declaration of Independence whose political tactics earned the term gerrymandering, and Vice President of the United States; and James Russell Lowell (1819–1891), noted American writer, poet, and foreign diplomat. It is now the residence of the President of Harvard University.

The house was built in 1767 by Thomas Oliver, Lieutenant-Governor of Massachusetts for a short period until he was forced to resign in September 1774. Although parts of Elmwood's interior have been altered, its exterior has not changed greatly over the years. It is a large, square, clapboarded structure in Georgian style with brick-lined walls and two interior chimneys.
Image by Midnightdreary on Wikimedia under Creative Commons License.
Sight description based on wikipedia