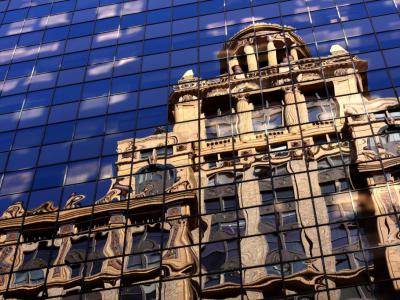 Downtown Houston's only complete example of Italian Renaissance architecture, the Neil Esperson building was designed by theater architect John Eberson and was lavishly decorated with massive columns, great urns, and terraces. Its crowning glory, a grand 'tempietto', bears similarity to one built in the courtyard of San Pietro in Rome in 1502, and is best observed standing by the front door and looking at the reflection in the glass building across the street.

This first neo-classical building was commissioned in the 1920s by Mellie Esperson for her husband, Niels, a Texas real estate and oil tycoon whose name is carved on the side, above the entrance, in large letters. The name "Mellie Esperson" is carved on the accompanying structure – a nineteen-story annex to the original, which is newer in the public's eye and not as tall. Also, instead of it being of neo-classical design, this annex was constructed in Art-Deco style.

Joined together as they are, the two buildings are certainly among the most recognizable in the downtown core. Small part of their fame is also due to rumors of hauntings by the ghost of Mellie Esperson. In 2007 both buildings were sold to Seligman Western Enterprises Ltd., a San Francisco-based family-owned real estate investment firm.
Image by eflon on Flickr under Creative Commons License.