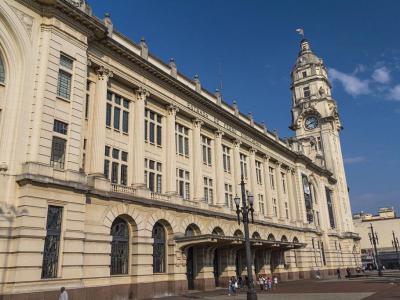 Estação (Station) Julio Prestes is a historic landmark of the city, located in the heart of the Luz neighborhood. Apart from being a transport hub, the magnificent railway station stands as a historic attraction, too. The original building was completed in 1875, prompted by booming coffee trade that forced the government of the Sao Paulo province to built a railroad, known as Sorocabana. Estação Julio Prestes was the first and the main station of this route. In 1925 it was renovated by architect, Cristiano Stockler das Neves, inspired by the Grand Central Station in New York. The project lasted 12 years and was completed in 1938. The new edifice stood 215 meters long and 26 meters high, occupying a total area of 25,000 square meters. The peculiarity of this building is that part of the platform has been made of the carcass of the German Zeppelin that flew over Sao Paulo at the time. After coffee trade crisis, the station lost some of its strategic importance. From 1949 until 1983 it was used by DOPS, the Department of Social and Political Order, a Brazilian security service, missioned to suppress opposition to the military junta regime. In 1999, after 18 months of work, the Estação Julio Prestes was partially converted to accommodate the Sala São Paulo, home of the State Symphony Orchestra of Sao Paulo. Despite such a transformation, the train station has remained operational until today.
Image by Luiz coelho on Wikimedia under Creative Commons License.
Sight description based on wikipedia