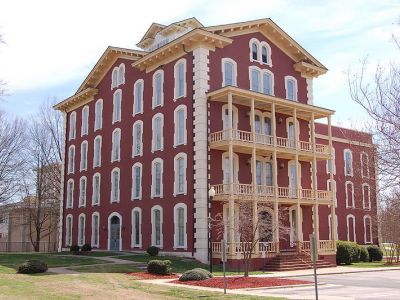 Estey Hall is a historic building on the campus of Shaw University in Raleigh, North Carolina. It was the first building constructed for the higher education of African-American women in the United States. Built in 1873, Estey Hall is the oldest surviving building at Shaw, which is the oldest historically black college in the South and was the first institution of higher learning established for freedmen after the Civil War.

When Shaw first opened, women were not allowed to attend the school. After a few years the school became coeducational, creating a need for a women's facility. School administrators chose G. S. H. Appleget, architect of large homes in Raleigh including the Heck-Andrews House, to design the new building. The result was a four-story brick building with a cross-gable roof topped off with a frame cupola. In 1882, the three-story south annex was added. Estey Hall contained the home economics, music, art, and religion classes.

Estey Hall was listed on the National Register of Historic Places in 1973 and is a Raleigh Historic Landmark.
Image Courtesy of Wikimedia and Jmturner.
Sight description based on Wikipedia.