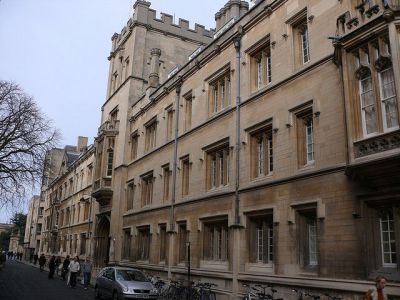 The main entrance to Exeter College is on Turl Street. This college is the fourth oldest of Oxford University, having been founded in 1314. Its founder, Walter de Stapleton, was the Bishop of Exeter and he wanted a small college that only taught future clergymen. Until the 15th century, there had been room for only 15 students at a time.

The college grew further in the 16th century when a former graduate, Sir William Petre, left funds for it in his will. The Front Quad, finished in 1710, was built on the site of the medieval buildings; only the 1432 Palmer’s Tower remains of the original college now. At the base of the tower you will see a memorial to the members killed in the Second World War.

The quad also houses the Great Hall, which was built in 1618 and has a beautiful vaulted ceiling. The quad is somewhat overshadowed by the chapel, designed by Sir George Scott in 1860, and modeled on the Sainte Chapelle in Paris.

The Library in Fellows Garden was also designed by Sir George in the 13th century style. The Divinity School, Convocation House are on the left of the Garden, with Brasenose Lane on the right and the Mound at the end, from where you can enjoy views of Radcliffe Camera and All Souls College.

The Rector’s Lodging in Margary Quad was another work by Sir George, but the rest of the quad was finished in 1964, with the Thomas Wood Building constructed for the college’s 650th anniversary.

At its foundation, Exeter was popular with the sons of the Devonshire gentry, though has since become associated with a much broader range of notable alumni, including J. R. R. Tolkien, Richard Burton, Alan Bennett, and Philip Pullman.
Image by shimgray on Flickr under Creative Commons License.
Sight description based on wikipedia