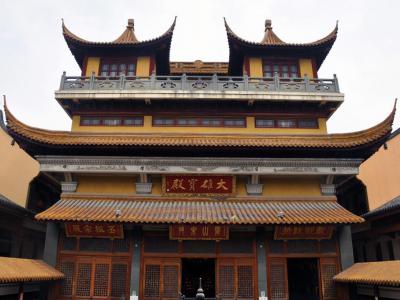 Fazangjiang is one of the four most prominent Buddhist temples in Shanghai, alongside those of Yu Fu Chan Si (the Jade Buddha Temple), Jing'an Si (the Temple of Peace and Tranquility), and Longhua Si (the Luster of the Dragon Temple). Its unique architecture would make it a top attraction of the Old Town, but curiously enough it does not advertise itself and, without stepping through its doors, people (locals or foreigners alike) may never know it is there. On the outside, it looks pretty much like any other gated entrance with no sound or smell passing from behind the wall, even if there is a prayer in session or incense burning underway.

The temple was built in 1924 and, similarly to the acclaimed Jing’an Si temple, was used as a factory during the Cultural Revolution of the 1960s-70s. Now restored and reconsecrated, some parts of its main hall reflect Art Deco motifs, adding to the uniqueness of its location inside a tower-like structure. A large statue of Buddha Gautama Sakyamuni sat on top of a lily dominates the hall. There are also two gilded walls with the images of “Arhats” – enlightened persons who have reached nirvana – as well as golden sculptures of the Buddhist trinity. There is even a small shrine dedicated to Dizang Wang, the Chinese God of the Underworld in Buddhist mythology. Swastika, the ancient Buddhist symbol of eternity, is found on many prayer ribbons hanging around.

Much to its merit, Fazangjiang has kept its historical identity intact and is now a welcoming oasis amid the hustle and bustle of a busy metropolis. No entry ticket is required, and the serene atmosphere of the temple makes it a fine place to acquaint yourself with the merits of Chinese Buddhism.

Tip:
A vegetarian restaurant run by the temple, serving simple dishes, is right next door and is quite handy for those seeking to quench their hunger other than purely spiritual.