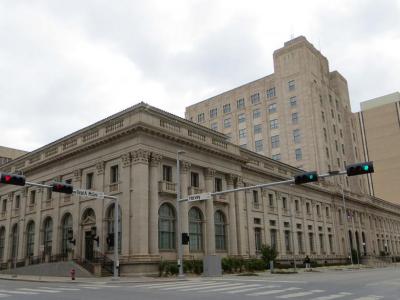 The Federal Courthouse is a historic post office, courthouse, and Federal office building built in 1912. It previously served as a courthouse of the United States District Court for the Western District of Oklahoma, and of the United States Court of Appeals, briefly housing the Eighth Circuit and, then the Tenth Circuit for several decades. It continues to house the Bankruptcy court for the Western District of Oklahoma.

The Federal Courthouse was the first monumental structure in Oklahoma City and served as an anchor for future federal development. This landmark building was designed by James Knox Taylor. The building was constructed in 1912 in the Beaux Arts Classicism style. This style of architecture was commonly used for important public buildings from the end of the 19th century until the early years of the 20th century. The building's symmetry, monumental form, balustrade, and pilasters (attached columns) are characteristic of Beaux Arts Classicism.

As part of the 1932 expansion, a centrally placed tower was added over the 1919 addition. The tower features stylized decorative motifs that are characteristic of Art Deco architecture, which emphasizes the verticality of the design and incorporates Classical forms while minimizing ornate elements.
Image Courtesy of Wikimedia and Joel Bradshaw.
Sight description based on Wikipedia.