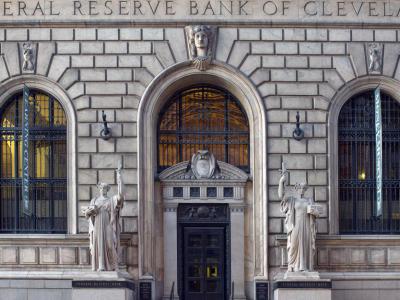 The Federal Reserve Bank of Cleveland is the Cleveland-based headquarters of the U.S. Federal Reserve System's Fourth District. The bank building, located at Superior Avenue and East 6th Street in downtown Cleveland was designed by the Cleveland firm of Walker and Weeks and completed in 1923. Its exterior architecture emulates an Italian Renaissance palazzo, is clad in pink Sienna marble. An extension to the building designed by HOK was completed in 1998, providing new facilities for check processing and cash handling. The building is listed on the National Register of Historic Places. The building's entrances feature allegorical sculptures by Henry Hering representing Security and Integrity flanking the East Sixth Street entrance, while his Energy watches the Superior Avenue entry. Its original 100 short tons (91 t) bank vault door is the largest in the world. The hinge has an overall height of 19 feet (5.8 m) and weighs over 47 short tons (43 t) fully assembled. The door casting itself was 20 short tons (18 t). It incorporates the largest hinge ever built. The vault's use was discontinued in 1997, though it is preserved intact for posterity.