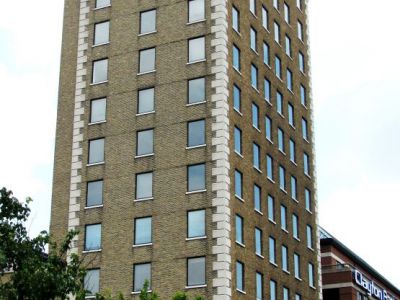 The First Bank Building was constructed in the mid-1920s and, over the years, has housed offices of dozens of banks, physicians, and various financial and architectural firms.

The main facade of the building, overlooking Market Street, consists of three arched openings, with the north opening leading to the general lobby, the south leading to the bank lobby, and the middle opening containing a window. The bank lobby is the most elaborate interior room, consisting of arched ceilings and a second-story mezzanine with a balustrade. The general lobby contains marble floors and bronze-plated elevator doors. Much of the building's interior was extensively remodeled in the early 1970s.

In 1988, the First Bank Building was listed on the National Register of Historic Places for its architecture and role in Knoxville's commercial history.
Image by Brian Stansberry on Wikimedia under Creative Commons License.
Sight description based on wikipedia

This sight is featured in a self-guided walking tour of Knoxville, Tennessee within the mobile app "GPSmyCity: Walks in 1K+ Cities" which can be downloaded from iTunes App Store or Google Play. Please download the app to your mobile phone or tablet for travel directions for visiting this sight. The app turns your mobile device to a personal tour guide and it works offline, so no data plan is needed when traveling abroad.

Knoxville is home to over 450 churches of many religious denominations. Situated at the core of the Bible Belt, many of them are Protestant. The following tour highlights the city’s most impressive religious sites, including Knoxville’s oldest church and other historically significant ones.