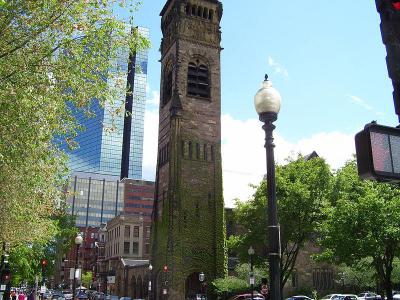 First Baptist Church (or "Brattle Square Church") is a historic Baptist church established in 1665. It first met secretly on Noddle's Island and then in the North End of Boston, Massachusetts. Since 1882 it has been located at the corner of Commonwealth Avenue and Clarendon Street in the Back Bay.

Featuring ivy-covered walls and a prominent tower with distinctive carvings by Frederic Auguste Bartholdi (sculptor of the Statue of Liberty), representing four sacraments with faces of famous Bostonians (including Longfellow and Hawthorne), Abraham Lincoln, and Bartholdi's friends of that era (including Garibaldi), this building highlights many of the Richardsonian Romanesque qualities that would later be shown in the nearby Trinity Church, one of Richardson's masterpieces. The Baptist Church's tower can clearly be seen as part of Boston's skyline when viewed from the Cambridge side of the Charles river.
Image by Swampyank on Wikimedia under Creative Commons License.
Sight description based on wikipedia