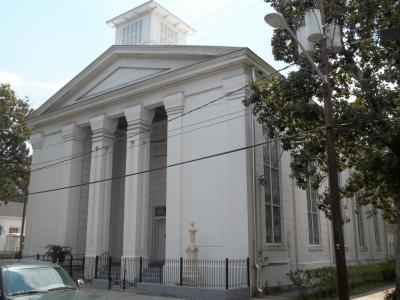 First Bryan Baptist Church has the distinction of being the oldest continually functioning Baptist church for African-Americans. It is based on a congregation that started in 1784, by Andrew Bryan, a member of George Leile's congregation.

The building was designed by John B. Hogg, and built between 1873-1888 on the site of the original church. It features stained glass windows that depict the church's founding members, including its first pastor, Andrew Bryan. Bryan was a Savannah slave who first organized the church in 1788. Later, in 1793, Bryan purchased both his freedom and the site of the church (formerly part of a Yamacraw Indian village) for thirty pounds. Two years after that, the first church building was built. In 1873, the first one was razed to make room for Hogg's design.

Bryan had a difficult time being a preacher. Before the church was built, he had to keep his congregation on the move. Many whites at the time viewed any gathering of slaves as a possible uprising, so Bryan was frequently imprisoned, and even beaten to punish him for preaching. Despite this, Bryan built his church and continued preaching until his death. Today, the First Bryan Baptist Church continues to serve the community as a place of worship for Savannah's Baptists.
Image by Ebyabe on Wikimedia under Creative Commons License.