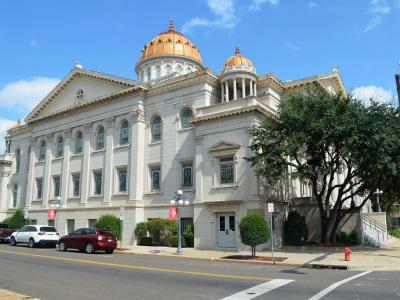 City Church is located on the intersection of Northwest 10th Street and North Robinson Avenue. This century–old downtown Oklahoma City landmark was home to several churches since 1910. Originally the home of First Christian Church, today it houses a protestant non-denominational congregation.

It is notable for its original white façade with six Corinthian columns at the front, lofty foreside staircase, massive entablature, gilded center cupola set on cylindrical base, and smaller corner turrets similar to the main one. This city landmark was restored after the 1995 bombing to retain all its initial glory. City Church is also known for its brilliant stained glass depicting key scenes and figures in Christian history.

It was listed on the National Register of Historic Places in 1984.
Image Courtesy of Patrick W. Moore.