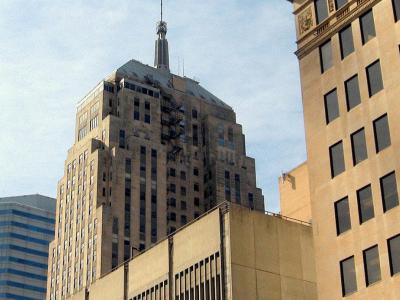 First National Center was built with an Art Deco, Neoclassical style inside and out, featuring polished aluminum, granite, glass and several varieties of marble from around the world. Rising 446 feet above the sidewalk, the building was topped out with an aluminum aviation tower and a red beacon light above a polished aluminum notched roof line. The aviation tower originally housed a massive white rotating beacon that was visible for 75 miles on a clear day.

One First National's most distinctive features is its night lighting, where the upper-story setbacks are lit white. There have been times when the lighting has changed - after 9/11, the setbacks were lit in red, white and blue tiers - which is still done on July 4. For many years, a cross was created by lighting office windows during Christmas.
Image Courtesy of Wikimedia and Urbanative.
Sight description based on Wikipedia.