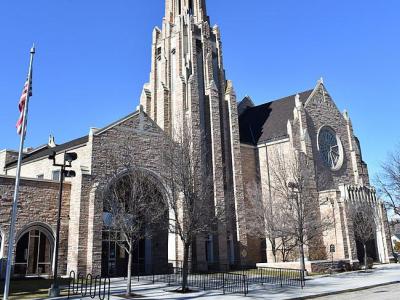 The present cathedral building was constructed 1958-1960 under the leadership of the Rev. Dr. Herbert E. Richards, and covers an entire city block. The stained glass is a notable and unique feature, depicting Biblical history as well as themes of the history of Christianity and aspects of American history including local references to Idaho and the city of Boise. The church is popular as a visitor destination, and attracts worshipers from all over America and the world. This is the third building to be used by the congregation. In about 1903-05, a new church was constructed at 10th and State streets. The new Cathedral of the Rockies structure was consecrated in December 1960, with a series of impressive ceremonies. In 2002 the structure was extensively expanded under the leadership of the present pastor, the Rev. Dr. Steve Tollefson. The ministries of the Cathedral of the Rockies are extensive, involving many services to the surrounding community. A full-time children's center and pre-school operates year-round.
Image by kencf0618 on Flickr under Creative Commons License.
Sight description based on wikipedia

This sight is featured in a self-guided walking tour of Boise, Idaho within the mobile app "GPSmyCity: Walks in 1K+ Cities" which can be downloaded from iTunes App Store or Google Play. Please download the app to your mobile phone or tablet for travel directions for visiting this sight. The app turns your mobile device to a personal tour guide and it works offline, so no data plan is needed when traveling abroad.

Religious institutions in Boise cater to every community's faith and belief, thus offering a place for their services and worshiping. This tour will guide you through the discovery of the most interesting religious spots, both of architectural and spiritual value.