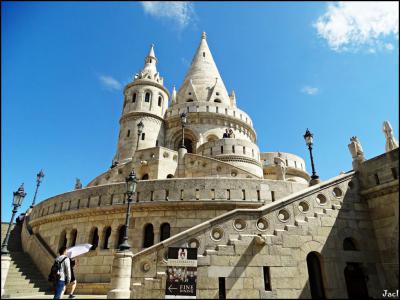 Directly adjacent to the Matthias Church, the massive neo-Gothic, neo-Romanesque structure, known as Fisherman’s Bastion, is an extension of the ancient city wall which, back in the Middle Ages, was defended by the guild of local fishermen assigned by king. The bastion itself was built between 1895 and 1902 to mark the millennial anniversary of Hungarian statehood. The seven towers of the bastion symbolize seven Hungarian chieftains who led their tribes to the land of contemporary Hungary back in the 9th century AD. The turrets on top of them are quite popular spots with photography lovers for the great shots they provide over the mighty river Danube down below and the Pest side of the city on the opposite bank. Perhaps for this reason, access to these turrets comes at a small fee. The remainder of the bastion's terrace is open free of charge.

The centerpiece of the bastion is the statue of St Stephen, the first Hungarian king who ruled the country between 1000 and 1038. The wide ceremonial staircase leading to it is also lined with several statues including that of John Hunyadi – military commander and statesman, the statue of St George Piercing the Dragon, as well as those of the 10th-century soldiers guarding the gate, sitting at the top of the stairs, under the arch.

The surrounding benches and arcades invite for quiet contemplation or, perhaps, a little romance too, in a secluded setting. And if you feel thirsty, check out the beverage restaurant at the top of one of the turrets, to make your senses more acute to more beauties of Budapest lying ahead.

Opening Hours:
24/7, all year round
Visiting between Oct 15 and March 15 is free of charge all day long
Otherwise, tickets for the upper towers are sold between 9am-7pm (Mar 16–Apr 30); 9am-8pm (May 1–Oct 15)
Image by Jose A. on Flickr under Creative Commons License.