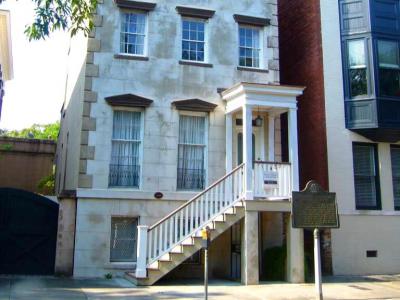 Fans of Southern literature are no doubt familiar with the work of Flannery O'Connor. Before her early death from systemic lupus at age 39, O'Connor wrote two novels ("Wise Blood" and "The Violent Bear It Away") and thirty-two short stories, primarily written in a Southern Gothic style, and usually involving grotesque characters and questions of morals. Many of her works also covered sensitive contemporary issues, like the Holocaust and racial integration.

O'Connor's childhood home was built in 1856, as a very modest, one-story Greek revival home. It remained that way until the 1930s, when it has undergone major renovations, to both the interior and exterior. The living room has been refurbished to restore the beauty of the heart of pine flooring, florid furniture, and delicate lace curtains from O'Connor's time. In 1993, a walled garden was added to the backyard, where O'Connor taught a trained chicken to walk backwards. Her appearance with the chicken was her first taste of publicity, and she called it the "high point" of her life.

Filled with memorabilia from O'Connor's past, the home is operated as a historic house museum and literary center, and one can feel what it must have been like to live there in the 1930s. Admission is $8 for adults, $6 for students and military.

Why You Should Visit:
There are books about and by Flannery for sale, and the tour provides many interesting facts about the events and environment that shaped her unique personality.

Tip:
Try to catch a lecture or reading and enjoy the home in a literature context. The best idea would be to catch the annual Birthday Parade and street fair – everybody dresses up!