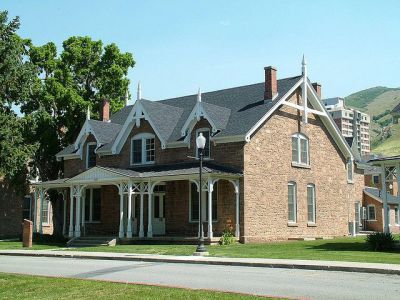 Camp Douglas was established in October 1862 as a small military garrison about three miles east of Salt Lake City for the purpose of protecting the overland mail route and telegraph lines along the Central Overland Route. In 1878, the post was renamed Fort Douglas. The fort was officially closed in 1991 and most of the buildings turned over to the University of Utah. A small section of the original fort is used by the Army Reserve and includes the Fort Douglas Military Museum. The Military Museum at Fort Douglas is housed in a building named after General Kauffman, who founded the museum and built it into one of the United States' premier military museums, featuring exhibits from all branches of the Armed Services. A cemetery was established in 1862 about a mile south of the original parade grounds. Later, the cemetery was expanded to accommodate a larger number of burials, not only from Fort Douglas but also from Fort Cameron, following its closure.
Image by dmathew1 on Flickr under Creative Commons License.
Sight description based on wikipedia