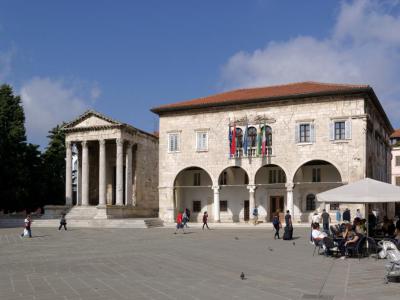 The history of Pula is in its main square, the Forum Square. Pula was officially founded in 44 BC by one Cassius Longinus, brother to the infamous Cassius, assassin of Julius Caesar and by Lucius Calpurnius Piso, Julius Caesar's father-in-law.

The forum of Pula was a venue for public events, politics, religion, and commerce. The square originally measured 128 feet (39 meters) by 269 feet (82 meters). In the north side of the forum were temples dedicated to the Roman gods Jupiter, Juno and Minerva.

Only the temple of Augustus from about 14 AD has been perfectly preserved. Parts of the other temples may be found in the back wall of the Communal Palace, built in the 13th century. The Pula Forum continued to be the town's main square throughout the middle ages.

In the Venetian era, the Communal Palace replaced the temples of the gods. It would be used as the governmental center. The Temple of Diana had served as a town hall since the 9th century. The core date of the Communal Palace is 1296, the time when Pula became a free municipality. The Palace remains the seat of government today.

The structure of the Palace shows a mixture of styles. The east walls show combined Romanesque and Gothic elements. The sculptures of Telemon and Siren in corners flanked by Renaissance columns and Baroque windows mark the latest changes to the Communal Palace. Having been neglected for centuries, the Palace is now restored and it is today a popular tourist attraction.
Image Courtesy of Wikimedia and Berthold Werner.