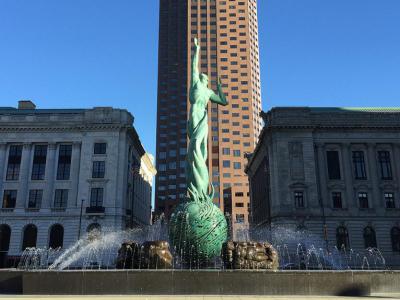 The Fountain of Eternal Life, also known as the War Memorial Fountain and Peace Arising from the Flames of War, is a statue and fountain in Cleveland designed by Cleveland Institute of Art graduate Marshall Fredericks and dedicated on May 30, 1964. The sculpture, which serves as the city's major memorial to its citizens that served in World War II, is situated on Memorial Plaza, which is part of the Cleveland Mall.

The fountain was initiated and promoted by the Cleveland Press. The centerpiece is a 35-foot (10.7 m) bronze figure representing man escaping from the flames of war and reaching skyward for eternal peace. The bronze sphere from which the figure rises represents the earth. Four granite carvings, representing the geographic civilizations of the world, are placed around the sphere. On the surface of the polished granite rim surrounding the fountain are bronze plates bearing the names of 4,177 Greater Clevelanders who perished in WWII and in the Korean War.