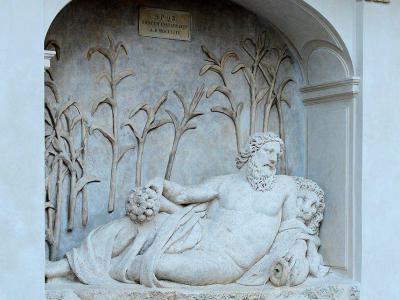 They say, good things come in pairs. Well, in the case of Via delle Quattro Fontane, they seem to double that. Just as the name suggests, the “Street of Four Fountains” is a home to four fountains of the late Renaissance, between 1588 and 1593, whose construction was ordered by Pope Sixtus V. The figures of the fab four represent the Tiber River (symbol of Rome), the Arno River (symbol of Florence), the Goddess Juno (symbol of strength) and the Goddess Diana (symbol of chastity).

The fountains of the two rivers and Juno are believed to be created by Domenico Fontana, whereas Diana was the work of Pietro da Cortona. Also located near the fountains is the Baroquesque church, San Carlo delle Quattro Fontane, designed by Francesco Borromini.

A comprehensive theory explaining the meaning of all the four statues within the fountains, finds them equivalent to Bernini's Fontana dei Quattro Fiumi whereat, presented in the form of a nymph or river god, the statues symbolize generic rivers of the four parts of the world known at the time. This opinion is conceptually supported by the fact that there is a broad alignment between the statues and the four cardinal points.
Image by Livioandronico2013 on Wikimedia under Creative Commons License.