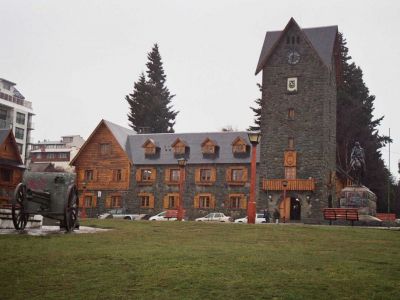 The Bariloche Civic Center, including the museum, was declared a National Historic Monument in 1987.
Image by Núria Pueyo on Wikimedia under Creative Commons License.
Sight description based on wikipedia

Want to visit this sight? Check out these Self-Guided Walking Tours in San Carlos de Bariloche. Alternatively, you can download the mobile app "GPSmyCity: Walks in 1K+ Cities" from iTunes App Store or Google Play. The app turns your mobile device to a personal tour guide and it works offline, so no data plan is needed when traveling abroad.

San Carlos de Bariloche is famous for its plazas and multitude of parks, most of them national parks. It is a very welcoming city, with a friendly environment and nice people. They will be glad to help you to find the place you are searching for. The following is a list of attractions that are popular for tourists and Bariloche's friendly locals.

San Carlos de Bariloche, commonly known as Bariloche, is an amazing city with a long history and ethnic culture. You can discover many important aspects and interesting facts in the museums. The most popular among tourists are: "Francisco P. Moreno" Museum of Patagonia and Museo del Chocolate Fenoglio. Be sure to visit some of the attractions listed below.

Commonly referred to as Bariloche, San Carlos de Bariloche is a town nestled high in the Andes in the Argentinean region of Patagonia. The town makes mark with its Swiss-style alpine architecture and the vibrant shopping scene of its main artery, Avenida Bartolomé Mitre. If shops, stores, and boutiques selling handmade products sound like your kind of fun, make sure to embark on this orientation...  view more