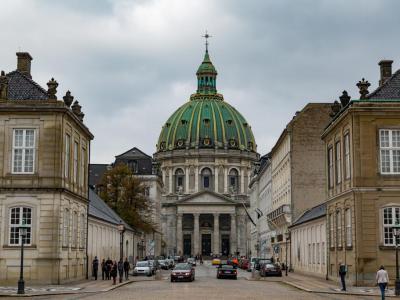 Also known as the Marble Church, Frederick’s Church is one of the most popular tourist attractions in Copenhagen – especially for its dome which is the largest in Scandinavia. This dome spans 31 meters and is supported by 12 columns.

Along with all other structures in Frederiksstaden district, the church was built to commemorate a member of the House of Oldenburg’s 300 years coronation jubilee celebrations. It was designed and erected by architect Nicolai Eigtved in 1740. King Frederick V laid the foundation stone in 1749. Eigtved died in 1754 due to which construction was hit by budget constraints and had to be stalled.

Johann Friedrich Struensee discarded the original plan in 1770 and the church remained incomplete for a while in spite of many efforts. For the next 150 years, the edifice remained in ruins. Carl Frederik Tietgen eventually got prominent architect Ferdinand Meldahl to design the church in its final form and financed its construction. Due to financial restrictions, the original plans for the church to be built almost entirely from marble were discarded, and instead, Meldahl opted for construction to be done with limestone. The church was finally opened to the public on August 19, 1894.

A series of statues of prominent theologians and ecclesiastical figures, including one of the eminent Danish philosopher Kierkegaard (who, incidentally, had become very critical of the established church by the end of his life), encircles the grounds of the building.

Why You Should Visit:
This church really has the wow factor; as beautiful inside as it is out (also, rather unique and unusual as it is circular inside).

Tip:
The dome can be visited – for a small fee – every day at 1pm sharp in summer but only at the weekend (Sat/Sun) in winter. Very impressive view from above!