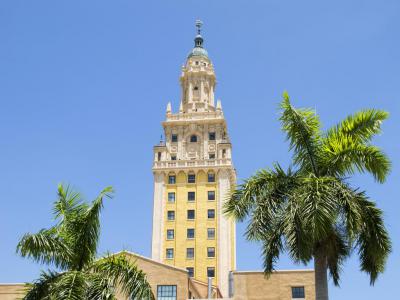 The Freedom Tower was built in Mediterranean revivalist style in 1925. It once housed the offices and printing facility of a major local newspaper The Miami News. The design closely resembles that of the Giralda Tower in Seville, Spain. It has a height of 78 meters and the cupola once had a decorative beacon.

The Miami News offices relocated in 1957 and the US Federal Government used the tower as a processing center for refugees fleeing from the communist regime in Cuba during the 1960s. Jorge Mas Canosa, the founder of the Cuban National American Foundation, purchased Freedom Tower and converted it into a monument for Cuban refugees in 1997, incorporating a museum, library, convention center, and the offices of the Cuban National American Foundation.

Today, the Freedom Tower belongs to Miami Dade University and is used as a cultural and educational center. The university has plans to house permanent exhibitions commemorating The Miami News and relating to the days when the Tower served as a major Cuban refugee processing center.

Why You Should Visit:
Beautiful photo opportunities, especially at night, when the tower is lit up with an array of colors.

Often dubbed the “Capital of Latin America,” Miami could have been just another deep-South city in Florida if it wasn't for Cuban revolution of 1959 that sent waves of Cuban refugees to Miami swiftly transforming the city's central neighborhood, once known as Riverside, into Little Havana.

The strong Cuban influence here is felt primarily in an eclectic mix of traditional...  view more

The coastal sunny city of Miami is a world-class destination for tourists, rich in sights and public venues. The city was off to a humble start on July 28, 1896 with a population of just over 300 people. Miami owes its existence to a woman and is the only major U.S. city founded by a female. Julia Tuttle, "the mother of Miami", was a local citrus grower who originally owned the land the...  view more

Visiting Miami you are very likely, at some point, to end up in South Beach. One of America's preeminent resorts known for its beaches and the glamorous scene around its happening nightspots and celebrity-chef eateries, this trendy and quirky neighborhood, nicknamed colloquially as SoBe, attracts the rich, famous, and youthful for almost a century, and is generally a fun place to be. Apart...  view more

The South Beach neighborhood of Miami Beach, Florida has long been associated with Art Deco architecture, distinguished for its eye-catching bright pastels. Pops of color combined with the style’s notable geometric lines, sleek curves, chrome accents, window “eyebrows” and fountains abound in the area, but even more so in the historic Miami Beach Architectural District.