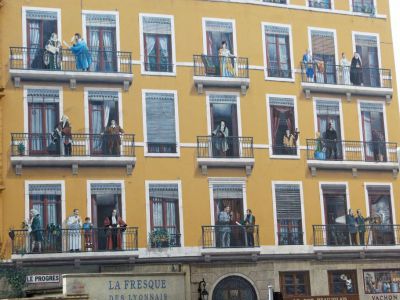 Among the many wonderful things to see in Lyon, surely the most remarkable one is the Fresque des Lyonnais.

This incredible trompe-l’oeil covers an entire building with over 800 square meters of still-life deception. It was created between 1994 and 1995 by various artists from the Cité de la Création, who have done similar work throughout France and in several other countries. The marvelous thing about this fresco is that there is always something new to discover that has previously escaped the eye.

Depicted here are 30 famous individuals, both living and dead, from different epochs and places, including the Lumière brothers (early film-makers), the Roman Emperor Claudius, Joseph Marie Charles (inventor of the Jacquard loom), Saint Irénée and many other distinguished historic personages. There are also some contemporary ones too, like l’Abbé Pierre (founder of Emmaüs), Bernard Pivot and Bernard Lacombe (the former player and former manager of the Olympic Lyonnais football club, respectively).

On the ground floor you can see shops, a library and a cafe that you’ll never be able to enter, even though they look quite real! On the one wall of the building there are painted hundreds of books, some open, and, if you look carefully, you will find among them “The Little Prince” by Antoine de Saint-Exupéry.

Have some fun and try to see if you can spot a smoking pipe, goldfish in a bowl, a pair of glasses and a feather quill in an inkpot.
Image by dierk schaefer on Flickr under Creative Commons License.
Sight description based on wikipedia