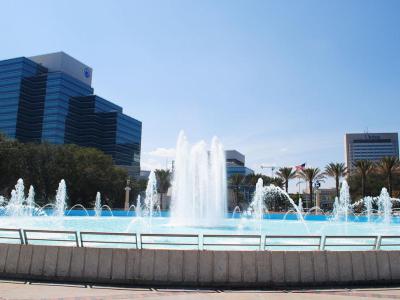 Friendship Fountain is a large fountain in Jacksonville. It is located in St. Johns River Park (also known as Friendship Fountain Park). The world's largest and tallest fountain when it opened, it has been one of Jacksonville's most recognizable and popular attractions. The fountain and park were designed by Jacksonville architect Taylor Hardwick in 1963 and opened in 1965. The fountain's three pumps could push 17,000 US gallons (64,000 L) of water per minute up to ten stories in height. Friendship Fountain remained one of Jacksonville's signature attractions through the 20th century, but severe corrosion and deterioration to the equipment resulted in periodic closures in the 2000s. In 2011 the city completed a $3.2 million renovation to the fountain and the surrounding park.
Image by djprybyl on Flickr under Creative Commons License.
Sight description based on wikipedia