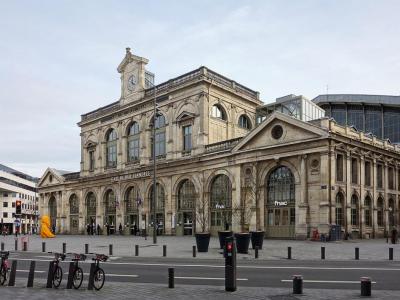 The initial station on this site, commissioned in 1848, consisted only of a ground floor, which was then added with an extra floor and a pediment with a large clock, commissioned in 1867, to complement the then newly-created Place de la Gare, outside the building.

In 1880, the old roof of the waiting lounge was redone, followed by other improvements, such as the expanded heating system and more. In 1883, further major modifications took place, including the complete redecoration of the waiting hall. In 1887 the Hôtel des Voyageurs was added, and then the rooftop in 1892.

Nowadays, the Lille-Flandres station is the largest TER station in France outside Paris, and is also the second provincial station in terms of attendance, after the Lyon-Part-Dieu station. The term Flanders was added to the name in 1993, when the neighboring Lille-Europe station (located on the LGV Nord) was opened.
Image Courtesy of Wikimedia and Velvet.
Sight description based on Wikipedia.