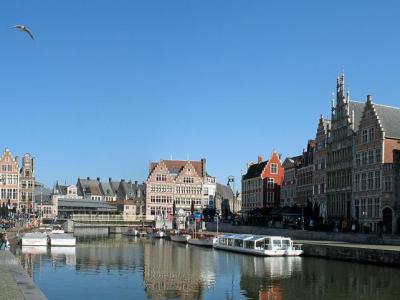 Ghent was a center of the grain and cereal trade as early as the 5th century AD. Laid out along the shores of the river Leie, in the center of Ghent, were the two main quais of Ghent, Grass Quai and Wheat Quai. Grass Quai, on the right bank, was reserved for herbs and vegetables. On the opposite bank Wheat Quai received shipments of wheat and cereals.

Ships have been docking at the quais since the 11th century. Grass Quai and Wheat Quai are lined with medieval buildings restored and rebuilt. Behind many of the restored facades there are shops and offices dedicated to modern purposes but they look as they did in the golden age of Ghent.

The stepped gables of the old guild houses have watched over the city since the 13th century. The Wheat Measure House, where wheat was first weighed in 1527 is today an accessory store.

The banks of the river are lined with terraces and cafes and wonderful places to hang out. On the renovated facade of the Mariot Hotel at Wheat Quai, two gilded swans swim in opposite directions: left for women and right for drinks. One wonders what entertainments were happening in the 16th century.

Boat rides are a popular way to take in the historic sights along the river as they appeared so many years ago.

Tip:
Make sure to climb the steps of Sint-Michielsbrug (St. Michael's Bridge), where Grass Quai and Wheat Quai can be viewed well with the canal. Another very nice viewpoint and photo spot is directly on Wheat Quai, looking in the direction of Grass Quai. From there you can see the building guild houses as well as some of the famous landmark buildings like the Belfry in the background. Take your time to look around, perhaps with binoculars.
Image Courtesy of Wikimedia and Marc Ryckaert.