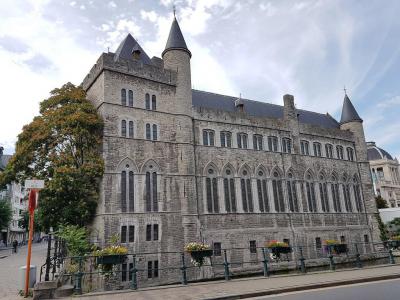 The Geeraard de Duivelsteen ("The Castle of Geeraard the Devil") is a Medieval fortress that once served to defend the Portus aan de Reep, a trading settlement from where the city of Ghent had originated. This is evident from the very thick walls, the presence of turrets and a reduit for monitoring and defending the area in case of an attack.

Despite the name and grim appearance, no devil has ever lived here. The Gothic-style edifice with the elements of Romanesque was built in the 13th century and was named after the knight Geeraard Vilain (1210-1270), the son of the 15th Viscount of Ghent, Zeger III, who used to live here. Vilain's nickname, "Geeraard de Duivel" ("Geerard the Devil"), was due to his dark hair and complexion.

Until the first half of the 14th century the castle had remained residence of Geeraard's descendants, after which it became a municipal property. Over the years that followed, the building had served a variety of functions: a gathering place for noblemen, an arsenal, a monastery, a school, an episcopal seminary, and a prison.

In 1807, the fortress was used as an orphanage for boys, and then from 1815 as an asylum for the mentally ill. In 1830, the Geeraard de Duivelsteen became a fire station. Towards the end of the 19th century it was bought by the Belgian government to house a national archive, for which purpose a new wing was added. The castle served in this capacity until 2015.

Presently, there are plans for the building to be converted into a luxury bloc of flats and a youth center.
Image Courtesy of Wikimedia and Tink128.
Sight description based on Wikipedia.