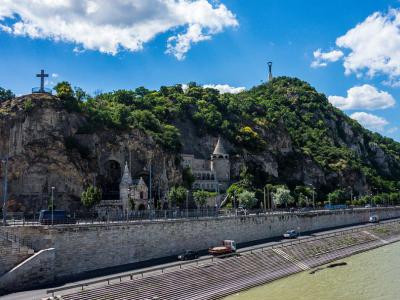 Rising high above the Danube, Gellért Hill is a dolomite rock which is named after the bishop who brought Christianity to the Hungarians. At 140 meters, it offers one of the best vantage points in Budapest with the most panoramic view of the city.

Back in the 18th century, the hill was mostly serene countryside covered in vineyards. Eventually, that idyllic picture had changed and the 20th century, in particular, brought much action to Gellért during the Second World War and later, in 1956, during the Hungarian Revolution, when the Soviet tanks fired from this height down on the city in a bid to repress the revolt. Dominating the hill is Hungary's very own “Statue of Liberty” set to commemorate the liberation of Budapest from the Nazis in 1944. Back in the day, this bronze lady standing atop a concrete pedestal, holding a giant palm leaf – symbol of victory, triumph, peace and eternal life, was also meant to celebrate the inclusion of Hungary into the Soviet bloc. Following the country's political and economic turnover in the early 1990s, the liberal mayor of Budapest decided to rename the statue, and today it is called the “Statue of Freedom” dedicated to those who sacrificed their lives for Hungarian independence.

Adjacent to the statue is a citadel built in the 19th century following Hungarian uprising against the rule of Hapsburg Austria. Set at this strategic site, ideal for shelling both Buda and Pest, all at once, in the event of any future revolt, it was put here on purpose. Since then, however, the citadel had served mostly as a prison and shelter for the homeless. Sadly, today it is not open to visitors and you can't get inside.

Walking up and down the hill, you may spot a number of cute little places worth stopping by and exploring, some offering truly unique views of various parts of Budapest that you otherwise won't be able to get. No wonder if you feel a bit peckish during the process, in which case there are several stalls, at the top of the hill, selling food and drinks. But even if you're here for views and views only, Gellért Hill is well worth the climb all the same!
Image by Visions of Domino on Wikimedia under Creative Commons License.