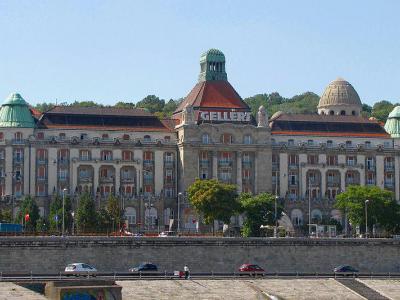 One of the best-known thermal baths in Budapest, Gellert Bath has become the epitome of wellness and spa culture in the city, largely contributing to the capital's appeal for over a century. Built in 1918, this spa complex is famous primarily for its architectural splendor manifested, among other elements, in the high vaulted glass roof and open-air pool which recently has been fitted with the artificial waves function that kicks in every hour for ten minutes – just enough to bring excitement into the water-splashing crowd.

The tradition of bath in Hungary was introduced by the Turks in the 16th century, when the country was part of the Ottoman Empire, although records of Gellert hot springs have been known since as early as the 15th century, predated by tales of the underground waters running deep beneath the hills of Buda, praised by monks and hermits for their miraculous healing powers, back in the Middle Ages. The Hungarian thermal baths grew incredibly popular in the 19th century seeing more and more locals and guests of Budapest rushing to reap the benefits of aqua therapy. To meet this growing demand, a fine-looking facility was needed to enable people to enjoy spa waters in a civilized manner.

Such was the case of Gellert Spa, the complex combining a spa hotel and thermal bath under one roof. A great sample of the ostentatious Art Nouveau style dating back to the Austro-Hungarian era, this large building stuns with its architecture, and particularly the tiling, right from the very entrance. Further inside, the visitors are offered a choice of indoor and outdoor pools, two thermal baths, two saunas and a steam room, complete with a set of massage and other treatment facilities. The traditional Thai massage, widely popular these days around the world, is available here too, and at a rather reasonable price. To quench one's hunger for another bodily pleasure, such as food, there is a garden cafe, tastefully filled with flowers and pretty statues.

The Baths are open from 6am to 8pm, and would fit in nicely with a sightseeing tour of Budapest any time of year.