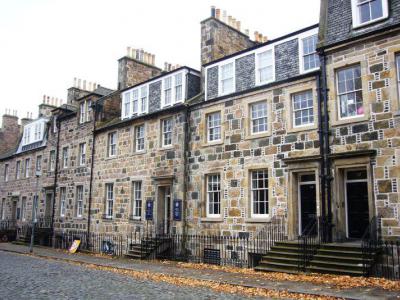 You will find George Square near the Meadows. The square is partly surrounded by the University of Edinburgh buildings, but it also holds several points of interest, so do make a little time for a small detour to see this old square.

The University buildings went up in the 1960s and include the Appleton Tower, the 13 story David Hume Tower that offers a great view of the city from the top floor, the William Robertson Building and the Adam Fergusson Building.

These buildings house lecture rooms, classrooms, laboratories and offices and the locals consider them among the least attractive buildings in the city, even though some of them have won architectural awards.

The points of interest are the 18th century terraced houses on the west side of the square, which have been preserved. Sir Walter Scott, the famous Scottish historical novelist, poet, playwright, and historian, spent his childhood in one of these houses.

The George Square Theatre puts on plays and musicals. It is the favorite venue of Edinburgh’s Fringe during the Edinburgh Festival.

Another favorite spot for visitors and students is the George Square Gardens, with the Edinburgh Labyrinth, which is based on the 13th century labyrinth in Charles Cathedral, France.
Image by John Lord on Flickr under Creative Commons License.