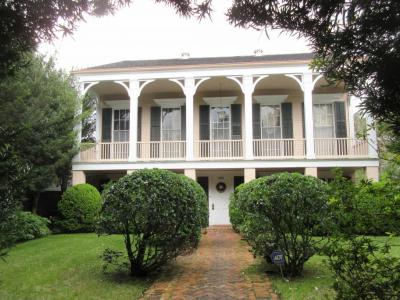 Located on the Garden District's west side, the building was built by author George Washington Cable in 1874 after the publication of his short story, "Sieur George". The single-story structure features a full-height basement and columns that include an arcade.

The son of a wealthy plantation owner, Cable was born in New Orleans in 1844. After his father died, however, he struggled financially and joined the Confederate Army in the Civil War. During a two-year bout with malaria, Cable took up writing as a hobby. In 1870, he joined the staff of the New Orleans Picayune. Having published his first story in 1873, the multiculturalism of New Orleans was a common theme in his writings. He generally supported racial equality, earning the ire of many of his peers. Cable left the South for Massachusetts in 1885 to escape this hostility and died forty years later. He was a close friend of Mark Twain, who was probably a frequent guest here.
Image Courtesy of Wikimedia and Infrogmation of New Orleans.