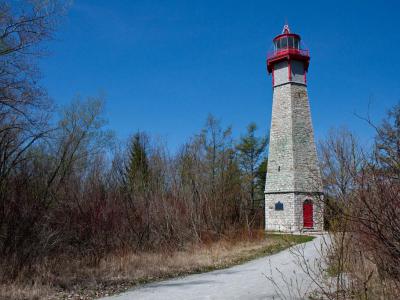 The Lighthouse at Gibraltar Point is one of the oldest standing structures in Toronto. Built in 1808, the lighthouse was used as water’s edge, however, due to constant sedimentation of sand, the structure today stands relatively inland. Measuring as high as 82 feet above the ground, the massive presence of the lighthouse can be felt from quite a distance. Overpowering with a deep seated secret, that is what makes the Lighthouse at Gibraltar Point the most enthralling monument in Toronto.

The lighthouse served as a watchful servant of the shore, working tirelessly for over 150 years, till it finally retired in 1958. It was then transferred into the custody of the city’s Park Department, after which it has not operated as a lighthouse anymore. Locked ever since 1958, this historical landmark only opens occasionally for tourist visits.

With a hauntingly beautiful surrounding, solitary presence of the massive structure and the age old story associated with it, a visit to the lighthouse culminates as the perfect monument experience. The first keeper of it, J.P. Radan Muller, met a gruesome and tragic end at this lighthouse. Speculated to be a murder, the suspects were never charged and brought to justice, and till this day the incident stands as a mystery. Believed to have been buried somewhere near the lighthouse, the ghost of Muller still roams freely in the area, moaning and crying on cold misty nights. Eery...
Image by Andrew Rivett on Wikimedia under Creative Commons License.