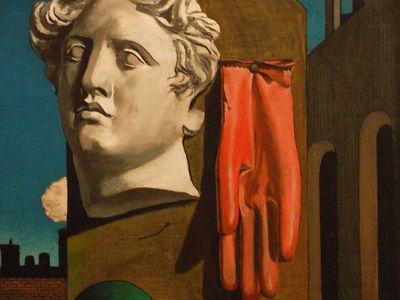 Visiting house museums is always a must if you want to find out how a famous person lived and the Giorgio de Chirico House Museum won’t disappoint you. The great artist bought an apartment in the Borgognoni Palace and you can visit the entrance hall, the dining room, bedrooms and studio where he lived and worked from 1948 until his death in 1978. On an easel in the studio is his last, unfinished sketch of a bathing woman. You can also see his book collection and his paints and brushes. In the halls on the 4th floor you will find paintings which include “Il Mediatore”, “Donna in Riposo”, “Le Maschere” and “Bagnanti”. There are also sculptures and graphics from his personal collection.

Giorgio de Chirico was perhaps the greatest Pre-Surrealist and Surrealist artist in Italy, his work is on a par with Salvatore Dali, but his best works were executed between 1909 and 1919 during his Metaphysical Period, during which time he founded the Metaphysical School of art movement. Just as his beloved Gala was Dali’s muse, so his wife Isabella was De Chirico’s and there are several portraits of her and she figures in many of his paintings. In 1939 he adopted Rubens’ Baroque style of art and these works were criticized as not being as good as his early work. So to revenge himself on those he called “ignorant critics” he back-dated some of his paintings, which were then accepted with acclaim.