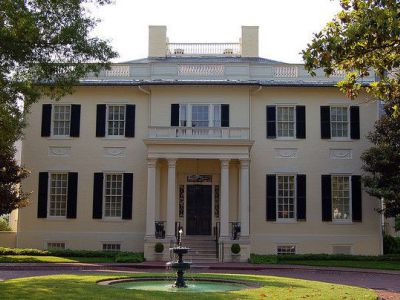 The Virginia Executive Mansion was built in 1813 and is the oldest governor's house in the nation that is still used for its intended purpose. Best of all, the mansion can be toured on a limited basis. For details, see the Capitol Visitors Center. Tours of the mansion are completed with docents in each room and last about 30 minutes. The current governor and his family do live here, so there is a chance you will see them out and about.

The home is a classic example of Federal-style architecture, designed by Alexander Parris. The house has been beautifully restored to appear as it did in the 1830s, but it not features more living space and is compliant with the Americans with Disabilities Act.

The house is full of history. Three US presidents have resided here at one time or another. Both Presidents Monroe and Tyler served as governor of the Commonwealth before their time in Washington, while William Henry Harrison lived there as the son of Benjamin Harrison. Interestingly, Governor Tim Kaine's wife, Anne Holton, lived in the mansion twice. She happens to be the daughter of former governor A. Linwood Holton Jr.

The gardens around the mansion are impressive too, and they host many events throughout the year. The house has made several appearances on popular TV over the years, including when Virginia First Lady Anne Holton hosted an American Idol finalist from Richmond and when Bob Vila featured the remodeling work on Home Again. Many distinguished visitors have stepped through this house's doors, including Queen Elizabeth II, many US presidents, and Charles Lindbergh. The home is a National Historic Landmark and is on the National Register of Historic Places.
Image by taberandrew on Flickr under Creative Commons License.