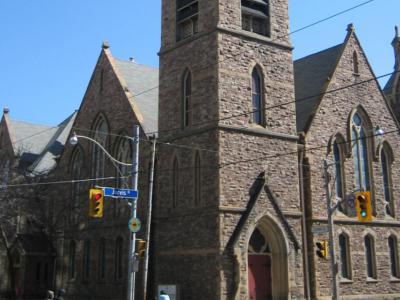 Grace Toronto Church is a Presbyterian Church in America congregation worshipping in the historic St. Andrews Church building in Toronto.

The church was originally built as Old St. Andrew's Presbyterian Church. St. Andrew's Church, (Church of Scotland) had dated back to 1830 when Toronto was still the Town of York. This congregation had split in 1874 over whether it should move west from the corner of Adelaide and Church Streets. The majority erected a new church in 1876 at King and Simcoe that became known as "New St. Andrew's", and it remains there to this day. The church was renovated by Henry Langley in 1877-78. Those who wished to stay in the area stayed in "Old St. Andrew's". There was, however, a need for a new building, and in 1878, they moved northeastward into this building at the corner of Jarvis and Carlton Streets.

In 1950, Old St. Andrew's had joined with Westminster-Central to become St. Andrew's United Church near the corner of Bloor East and Yonge Streets, and by 1951, the Old St. Andrew's building was sold, and it became the main church of Toronto's Latvian and Estonian worshippers. Saint Andrew, as a renowned saint of the Christian Church, was retained by the congregations.

As of October 1, 2015, St. Andrew's became the new home for Grace Toronto Church. The historic building became home of a Presbyterian church again.

Grace Toronto Church was founded in 1992 by Stephen Beck. During this time the church flourished. In 2002, Beck and his family left to become missionaries in Germany, and attendance at Grace began to dwindle. In 2004, Reverend Dan MacDonald became pastor of the church. The church was reduced to a handful of people in 2004, so Dan and Sue, under the guidance of the denomination, re-planted the church. The congregation was reduced to 10 people. In 2006 there were 25 regular attenders. Since 2006 the congregation has grown exponentially.
Image by SimonP on Wikimedia under Creative Commons License.
Sight description based on wikipedia