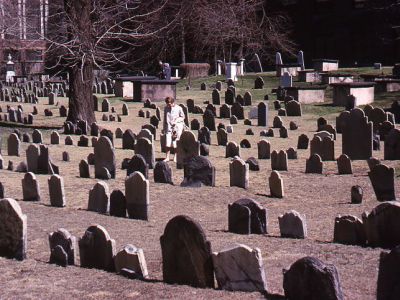 Founded in 1660, the Granary Burying Ground is the third-oldest cemetery in Boston. Located on Tremont Street, it is the final resting place for many notable Revolutionary War-era patriots, including three signers of the Declaration of Independence, Paul Revere and the five victims of the Boston Massacre. The cemetery's Egyptian revival gate and fence were designed by Boston architect Isaiah Rogers (1810-1849), who designed an identical gate for Newport's Touro Cemetery.

Prominently displayed in the Burying Ground is an obelisk erected in 1827 to the parents and relatives of Benjamin Franklin who was born in Boston and is buried in Philadelphia. The oldest memorial in the yard lies near the Franklin monument memorializing John Wakefield, aged 52, who died 18 June 1667. Why there is a seven-year gap between the establishment of the burying ground and the oldest memorial is unknown.

Why You Should Visit:
This is, of course, unique to Boston. As you may recall, Boston was one of the earliest settlements in the "New World", and you won't see headstones and burial rows, like the ones here, anywhere else.

Tip:
A tour guide would be worth it to show you straight to the more notable graves here.