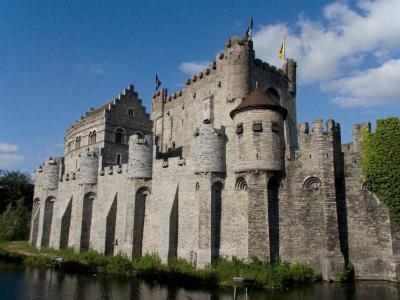 In 1180 Count Philip of Alsace wanted to impress the sassy burghers of Ghent with the idea that he was the big boss. But Gravensteen originated in the reign of Arnulf I in the 9th century. The site was fortified around 1000 AD, first in wood and then in stone. Philip built his castle in 1180 to replace the motte-and-bailey castle destroyed in 1176.

Philip had been on the Second Crusade and he was impressed by the crusader castles he saw. He wanted one like that. The castle has a central donjon, or keep, a residence and other smaller buildings. These are surrounded by a fortified enclosure with 24 small- sized barbicans. A large moat, fed by the river Leie, completes the picture.

The castle was the main residence of the Counts of Flanders until 1353. Louis of Male (1330-1384) was the last tenant in possession of Gravensteen. He moved to nearby Court of Walls as Gravensteen Castle was falling into disrepair.

After the last of the Counts departed, conditions at the castle took a nosedive. It was used as a court and prison-torture house until the 18th century. From 1353 to 1491 it was also a mint. During the industrial revolution it became a cotton mill. How the mighty had fallen!

In 1893 the city of Ghent had bought enough of the castle to begin major restorations. Under the direction of architect Joseph de Waele, a romanticized Gothic style was used to recall the castle's 12th century appearance. The Gravensteen starred in the Ghent World's Fair of 1913. The castle is open to the public.

Why You Should Visit:
To go back in time and enjoy the excellent views of Ghent's medieval skyline from the top (particularly at dusk).
Nowhere else in the world will you find such a massive castle right in the heart of the city!

Tip:
Save time and skip the queue by booking tickets online, but make sure you go early enough. Don't skip the (free) entertaining audio guide – you'll probably never hear another like it!