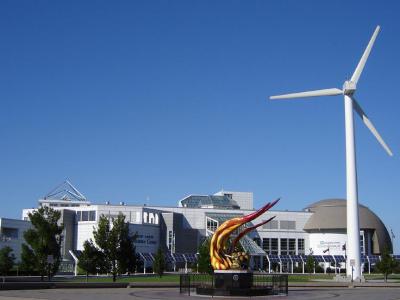 The Great Lakes Science Center is a museum and educational facility in downtown Cleveland. It's exhibits focus on helping visitors to understand science, technology, and their interdependence with the environment. Many of the exhibits document the features of the natural environment in the Great Lakes region of the United States. The facility includes signature and traveling exhibits, meeting space, a restaurant, and an Omnimax theater.

The museum opened in July 1996. The center's signature exhibits concentrate in three major areas: Great Lakes environment, technology, and science phenomenon. During the 2005/2006 school year, a new Outreach program made its debut, and Great Summer Science, the museum's summer science camps, started summer 2006. Also during the summer 2006, the Science Center installed a wind turbine in its front yard. The Science Center estimates the turbine would provide around 7% of the Center's power. In Summer 2007 they also completed the installation of a 156 panel solar array forming a semicircle at the entrance of the Science Center.