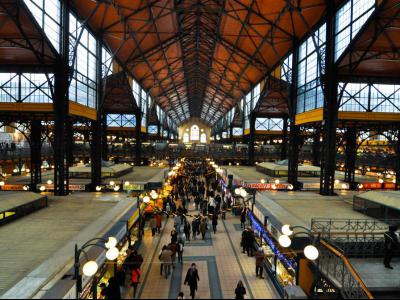 Budapest's central market is one of the mandatory places to visit for those newcomers to the Hungarian capital. The largest and oldest marketplace in the city, it was built in the late 19th century courtesy of the first mayor, Karl Kamermayer, who subsidized its construction out of his own pocket and under whose tenure Budapest turned into the country's political, economic and commercial hub, much as one of Europe's cultural centers.

Clad in steel, with an elegant entrance gate featuring neo-Gothic design, the market is spread over three floors, covering the total area of 10,000 square meters. A particularly distinctive feature of this building is the roof recently restored and adorned with colorful tiling. Badly damaged during two world wars in the 20th century, the market remained closed for several years. The restoration works undertaken in the 1990s brought it back to the original splendor.

If you're a foodie with the taste for regional specialties, the stalls of Hungarian goodies such as lángos (deep-fried discs of dough smothered in sour cream and cheese), paprika, Tokaji wines, túró rudi curd snack, and caviar, as well farm-made sausages, sauerkraut, stuffed peppers and other delights sold at very reasonable prices, are not likely to leave anyone indifferent. Most stalls on the ground floor offer meats, pastries, candies, spices, and spirits, while the floor above accommodates eateries and souvenir stands. The lángos stand, widely regarded to be the best one on this market, sits here serving this delicious snack with regional beer. At the basement there's a supermarket, a fish market, and pickle stalls offering traditional cucumber, cauliflower, cabbage, beet, tomato, and garlic pickles, to mention but a few.

Other than quality food, the market offers a wide choice of moderately priced non-edible items as well, such as handicrafts, folk art, porcelain, crystal and souvenirs of various sort. Take your time to search for the best value for money, since many vendors here sell identical items. So if you're looking for handcrafts, be sure to get all the way around the back. Note that the market is largely a cash-only operation, except for the souvenir section. But the good news is that some businesses equally accept both the European Euro and the Hungarian Forint.