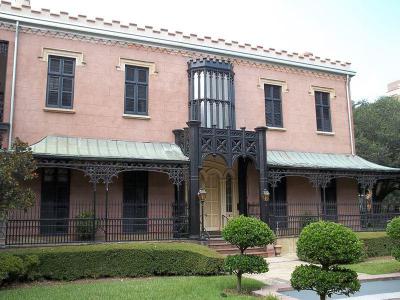 Built between 1853 and 1861 for cotton merchant Charles Green, the Green-Meldrim House – originally the most expensive 19th-century house in Savannah – is one of America's finest and most lavish examples of Gothic Revival architecture. Located in Madison Square, at the corner of West Harris and Bull Streets, it features a stuccoed brick exterior, cast-iron porch, oriel windows and an imposing front cast-iron fence. The main entrance has an iron portico believed to be unique in the United States, with octagonal posts supported by a pair of arches, while a crenelated parapet rings the roof. The interior of the house, following a center-hall plan, retains original woodwork, plaster and ironwork, including a freestanding staircase, in addition to crown moldings, chandeliers, and gilded-frame mirrors imported from Austria.

The house was added to the National Register of Historic Places in 1974 and designated a National Historic Landmark two years later, for having played a key part in Civil War history. In 1864, Union General William T. Sherman occupied the house and used it as a headquarters until the end of the Civil War. It was here that Sherman composed his famous telegram to President Abraham Lincoln, in which he communicated his desire to present to the President "as a Christmas Gift the City of Savannah" along with 150 cannon, plenty of ammunition and about 25,000 bales of cotton. In 1892, local politician and judge Peter Meldrim purchased the property and lived in it for several decades, but later, in 1943 his heirs sold it to the adjacent St. John's Episcopal Church, which offers tours and uses the premises for meetings and wedding receptions.

Why You Should Visit:
What makes this delightful mansion, with its large and ornate rooms, so worth visiting is the charm and expertise of the 'docents' – the guides whose knowledge is encyclopedic.
The history of General Sherman's stay and his relationship with the owner of the house alone are worth the trip through the house. The tri-fold front doors are another standout.