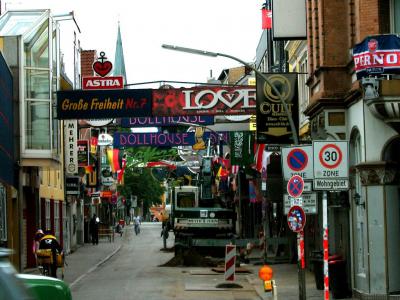 In 1612, a special district was formed with two streets named Big Freedom and Small Freedom. Craftsmen could pay an annual fee to ply their trade, whether or not they were members of their guilds. The streets were, therefore, a special economic zone. In addition, freedoms, including religious freedoms, were granted.

The street gained popularity as a street of frivolity in the 1940s. During the 1960s, The Beatles began their career playing at different clubs on the street, such as Indra, Kaiserkeller, and Starclub.

Today, Great Freedom Street remains popular with locals and visitors alike. Many bachelor and bachelorette parties are held on the street. In addition, the Dollhouse striptease bar is very popular. Olivia Jones, Germany's most famous drag queen, is the star of the Olivia Jones Bar. Burlesque bars and male strippers also make their home on Great Freedom Street.
Image Courtesy of Wikimedia and GNU FDL.