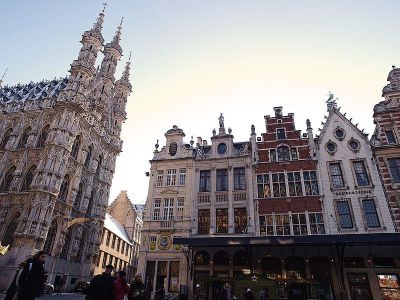 The Grote Markt of Leuven is situated between the Oude Markt and the Fochplein and near both the Bondgenotenlaan (Avenue of the Allied Forces) and the Muntstraat (Mint Street). Its location on the crossing of some of Leuven's most famous and most touristic spots makes the Grote Markt one of the city's busiest squares. However, it has been pedestrian-friendly for some years; only public transportation buses from De Lijn are allowed to use the square.

This location is one of the oldest and most historic in all of Leuven. The square has existed in its present form since the 14th Century, when the Catholic University Leuven was established. Most of the square's buildings are built in the Gothic style, of which the town hall is a prime example. Other buildings on the Grote Markt are the Church of St. Peter and several guild houses. As throughout Leuven, there are also many pubs, taverns, and eateries on the Grote Markt. There is a significant contrast between the more formal and traditional style establishments on the Grote Markt and the more trendy, youth-oriented and student entertainment spots on the nearby Oude Markt.
Image by mararie on Wikimedia under Creative Commons License.
Sight description based on wikipedia